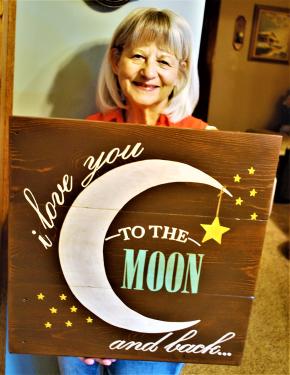 Rescuing old wood and turning it into salable art is the focus of Rosalee Bures' crafting.

For the fourth straight year--two now on either side of 2020's pandemic-cancelled Sugar Mound Arts and Crafts Festival--the rural Richmond woman and her crafts can be found this weekend in the indoor arena dubbed the "Sunflower Barn" on the Linn County Fairgrounds.

A stay-at-home partner in the family's farming and livestock operation southwest of Scipio, Bures first began to answer her calling to create in 2004.

"I've always wanted to do crafts and show," she said.

Jewelry was her first step, followed by such crafts as gnomes in cloth and paintings on landscape bricks, a craft utilizing outdoor paint and varnish she still does today.

Her primary art now, wood-backed paintings, came from a friendly prodding by her sister to "do boards with words and sayings."

Her wood sources began with industry palettes but have now expanded to utilize lumber salvaged from barn granaries and old cabinets.

Another wood-based craft is the use of decorative small-tree slices, but those creations might be short-lived now.

"My husband would cut them for me," said Bures about her mate who now suffers from a chronic respiratory ailment. "My grand-nephew has been doing it for me, but I don't know for how much longer."

After this weekend's show at Mound City, Bures will be at the Ottawa show during Veteran's Day weekend Saturday and the Burlington show the Saturday following. As well, she said she would participate in two or three "little" shows during the autumn at Garnett's St. Rose Philippine Duchesne School and Holy Angels Catholic Church and School

Rosalee Bures displays one of her artistic creations applied onto a rescued portion of an old barn granary.