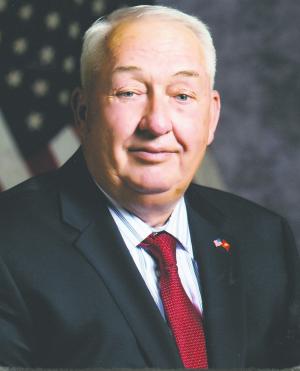 Many kind words were spoken Monday by elected officials and others following word that former Sheriff Paul Filla passed away unexpectedly Saturday evening.

Following a prayer for comfort for Filla’s wife, Lynne, County Commissioner Rick James told attendees, “Paul Filla, former county sheriff – as well as chief of police, and more importantly to me, U.S. Marine for over 25 years – passed away.

He continued that “our hearts and prayers go out to Lynne and his family.”

The county will be following protocol with the Governor’s Office to be able to lower flags to half-staff.

AMR Operations Manager Capt. Galen Anderson gave condolences to the family of Paul Filla stating, “We worked side-by-side with Mr. Filla for years. He was a friend, and it is a great loss.”

La Cygne Mayor Debra Wilson said,”On behalf of the City of La Cygne, I would like to express our condolences to the family of Paul Filla. Paul served as the Police Chief for our community from 2010 until 2012. He performed his duties to the fullest and held in his heart the best interests of the citizens of our community at all times. We were thankful to have had the opportunity for Paul to represent our city Police Department. He will be sorely missed!”