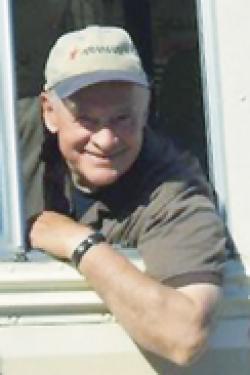 Bob Vaughn, 68, died unexpectedly at his home Oct. 29, 2014 in Fairbanks, Alaska. He was born Dec. 26, 1944, in Prescott Kan. to Raymond and Mildred Vaughn. Growing up in southeast Kansas, he enjoyed riding horses, hunting, fishing, and working on the family farm.
He graduated from Prescott High School in 1962, then attended Fort Scott Community College, Emporia State University, and the University of Alaska. His areas of study were Biology and Organic Chemistry. He was awarded an all-expenses-paid scholarship to study the growing habitat of moss in Point Barrow, Alaska in the summer of 1970. He fell in love with Alaska that summer and returned the following spring to live in Fairbanks, where he called home.
He enjoyed the life of a bachelor living in his cabin out in the woods, reading and working on his books. His professional life was as varied as his interests. He fought forest fires in California in the 1960s and worked as a mechanic in his uncle’s shop. In Fairbanks, he worked tracking satellites for the European Space Agency and later Gilmore Creek. He was a commercial fisherman in Cordova and worked for the Crisis Line, counseling people in crisis. In his later years, he worked for Aramark as a tour bus driver in Denali National Park which gave him an opportunity to show off Alaska’s wildlife. He volunteered at the literacy council, the native mission, and was active in the McGrath Baptist Church of Fairbanks. He enjoyed hiking on his days off with his younger coworkers. Getting up at 5 a.m., he would arrive at the Hamme pool in Fairbanks and swim a mile every day, gaining the nickname “Backstroke Bob” from his friends. With these same friends, he often would enjoy playing practical jokes, talking about his work at Denali, his grandchildren, and what book he was working on at the time. He never knew a stranger, often spending hours visiting with friends, family and coworkers. He was an avid reader, history buff, and writer. He loved animals especially dogs, but cats found him particularly interesting.
He was married briefly to Mary Ann (Leamon) Childers. He was preceded in death by his parents; one brother, Eugene; two great-nephews, Mathew Cubley and Levi Watt; and great-niece Hailey Watt. He is survived by brothers, Glenn and his wife Jean Vaughn of Prescott, Kan. and Jimmy and Wanda Vaughn of Urich, Mo.; sister, Arlene and husband Bob Seitz, of Chugiak Alaska; several nieces and nephews; his daughter, Michele Lyon and husband Kevin; and his grandsons, Daniel, Jarrett and Andrew of Fort Scott.
Friends and family are invited to a memorial service at Prescott United Methodist Church at 2 p.m., Dec. 26, 2014.
A memorial service was previously held at the Independent Baptist Church in Anchorage Nov. 9, 2014, with burial Nov. 10, 2014 at His Servants Haven of Rest Cemetery on the grounds of the Independent Baptist Church youth camp in Palmer, Alaska. Services were conducted by Pastor Stan Roach.