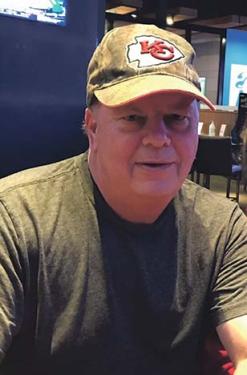 He completed his GED in 1984. Curt enrolled in Spartan School of Aeronautics in Tulsa, Okla.  After completing one year of schooling, he decided that it was not what he wanted to do. He returned home to Goodland and worked for his dad at B&B Electric for one year. Curtis then enrolled at the Northwest Kansas Technical College in the Communications Program.

After graduation, Curtis moved to south Texas, working for a small telephone company.  He then returned to the Kansas City area and was employed by Sprint. The company was sold many times and Curt was employed by CenturyLink at the time of his death.

In his free time, Curt loved to cheer on the KC Chiefs! He never missed a game! He was also great at convincing his niece and great-niece to be Chiefs fans while their families are Bronco fans! He was very proud of that accomplishment.

Curtis also enjoyed riding his Harley with his buddies in Mound City, Kan. He made some very special friends while living there! Curtis and his dogs (kids) came to Goodland often to visit. He enjoyed special times with nieces and nephews and great-nieces and nephews.

Preceding him in death were his maternal and paternal grandparents; and his sister Terri Blythe.

He is survived by his parents Trent and Sharon Blythe of Goodland; two sisters; Gina (Rick) Haeffner of Colby, Kan., and Rhonda (John) Robinson of Sharon Springs, Kan. He is also survived by numerous nieces, nephews and friends.

Funeral services will be held on Friday, March 25, 2022, at 10:30 a.m. (MDT) at Koons-Russell Funeral Home in Goodland with Pastor Randy Payne officiating. Burial will follow in the Goodland Cemetery.

Memorial contributions may be designated to the Northwest Kansas Animal Shelter and may be left at the services or mailed to Koons-Russell Funeral Home, 211 N. Main Ave., Goodland, Kan. 67735.

Online condolences for the family may be left at www.koonsrussellfuneralhome.com.