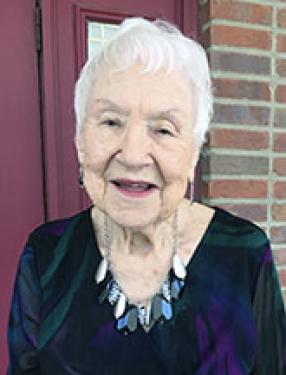 Doris Louise (Dresker) Phillips, 97, passed away peacefully on May 15, 2020, in Atchison, Kan., with granddaughter Mlle Caudle by her side.

Doris was born on Oct. 3, 1922, to H.M. Dresker and Cora Belle (Guthrie) Dresker in Olathe, Kan. She grew up in Fontana, Kan., where her father owned a grocery store. She loved being able to eat all the candy and black walnut ice cream she wanted! Doris graduated from Fontana High School in 1940.

She was married to Robert Brocaw on July 31, 1940. They had two children together, Beverly (Larry) Brocaw Hamman and Chuck (Lynette) Brocaw. They later divorced.

In 1972 Doris married Jim (Gramps) Phillips, and they lived in Columbia, Mo., for five years before traveling and living in their mobile fifth wheel for the next three years. They moved to Olathe, and then Pleasanton, Kan., before moving to Bendena, Kan., in 1995 where granddaughter Mlle (Neil) Caudle and children reside. She was a member of Troy Christian Church. After Jim passed away in 2000, Doris lived in Paola, Kan., Troy, Kan., and then Atchison.

Doris was loved by all. She lit up every room she was in with her infectious smile and spunky personality. Her family was her everything, and she was always quick to brag on them.

She was preceded in death by her parents; three brothers; two sisters; a son, Chuck; daughter-in-law Lynette; and grandsons Trent, Christopher and Brandon Brocaw.

The body has been cremated. A private family graveside service was to be set for a later date. Condolences can be sent to the family at: