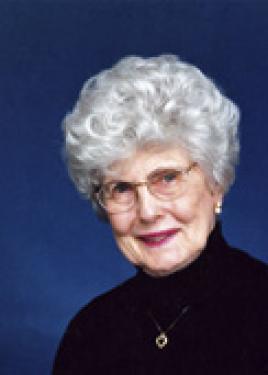 Dorothy Fern Hodgson Hosley Koontz passed away Dec. 12, 2014, in Littleton, Colo. She was 100 years old. Always known as “Fern,” she was the youngest of seven children and the only girl. All of her brothers preceded her in death.
Fern was born on a farm in Linn County, Kan., to Stephen and Cora Dell Hodgson. She graduated from Parker High School in Parker, Kan., and attended Pittsburg College in Pittsburg, Kan., where she met and married James L Hosley in 1936. They lived briefly in Cullison, Kan., later moving to Salina, Kan., where James taught at Salina High School and where their daughters Saundra Beth and Karen Lea were born.
Fern was active in the First Methodist Church and many other groups and organizations. For many years she was a poll worker for local, state and national elections. For a time she ran her own nursery school. After the death of her husband in 1961, Fern served for three years as a sorority housemother at Kansas State University in Manhattan, Kan.
Fern later married Arthur Allen of Topeka, Kan., where they lived for 25 years. In 1992, she moved to Littleton, Colo., to be near family. In 2001 she married former high school sweetheart, Donald Koontz of Garnett, Kan. They spent more than 10 happy and active years together. Don Koontz passed away in January of 2012, at age 100.
Fern’s interests included sewing, cooking, playing cards, oil painting, and flower arranging. She made several beautiful and intricate quilts for family members. Her family compiled many of her recipes into a cookbook. Among her most beloved recipes were apple crisp, German chocolate cake, angel food cake, Christmas cutter cookies, vegetable beef stew, rhubarb pie and caramel nut cinnamon rolls.
Fern is survived by her daughters Saundra Sheffer of San Dimas, Calif., and Karen Barrett of Littleton, Colo.; five grandchildren; six great-grandchildren; and one great-great-grandchild. Memorial service and inurnment of ashes will be in Salina, Kan., in the spring of 2015.