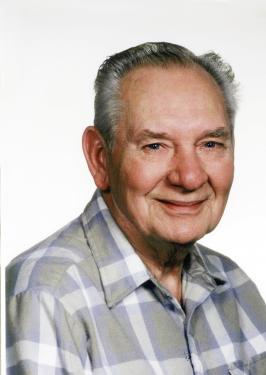 Elmer Henry Wayne passed away July 30, 2015, in Corpus Christi, Texas. He was born March 18, 1926, in Mound City, Kan.
He was preceded in death by his parents, Ina Cash Wayne and Ira Wayne; brothers, Walter Wayne, Harlan Wayne; and uncle, Sidney Wayne.
He served his country proudly during World War II; he was a tail gunner on a B-17 bomber, “Hikin’ for Home.” He was based in Kettering, England.
After returning to his parents’ home after the war, Elmer tried different careers. He worked in Michigan for General Motors, in Washington as a student and forest ranger, and back in Kansas at the U.S. Post Office. During this time he met the love of his life, Mary Jo Forsyth. They married on Christmas Eve 1950. They lived in Pleasanton, Kan. Mary Jo began her teaching career.
They moved to Corpus Christi, Texas about 1952. Elmer began his 35-year career as a machinist with the Caller Times newspaper. Mary Jo taught at Carroll Lane Elementary, then at Calk Elementary until retiring in 1992.
Elmer was an avid outdoorsman; he and Mary Jo loved to go square dancing, traveling and to school and family reunions.
They raised three wonderful sons, Douglas, Hugh, and Bryn. They took their boys on many great family trips and raised them to be moral, upstanding young men.
Elmer lost his wonderful Mary Jo in 2003, after 53 years of marriage. A close family friend helped him through the hard times that followed. Dianne McCauley was the last great love of Elmer’s life. On one of their last visits, he told her, “You get more beautiful every time I see you.”
The Waynes and McCauleys became a loving extended family.
We will all miss Elmer Wayne.
A man true to his word, he never let a friend down. He offered love and support to those who needed it. The world will never see another of his kind.
Elmer is survived by Douglas Wayne (Susy), Hugh Wayne (Susan), Bryn Wayne (Soraya), Dianne McCauley, Sam and Sue McCauley, Mary and Wayland Barmore, Ann and Bobby Hagens, Kim and Jere Sanders, and Vicki and David McMinn, Orelia Herrera and Sarita Mendoza; four fantastic grandchildren, Melissa (Ivan) Jimenez, Heather (Jake) Blair, James Wayne and Larna Wayne, and the greatest great-grandchild, Jocelyn Jimenez.
Pallbearers will be Wayland Barmore, Sam McCauley, Melissa Jimenez, Bryn Wayne, Heather Blair, and Larna Wayne. Honorary Pallbearers are Sgt. Christopher McMinn, Joshua McMinn, Draven Wilkes, and Trey Wilkes.
To view tribute, please visit www.seasidefuneral.com.