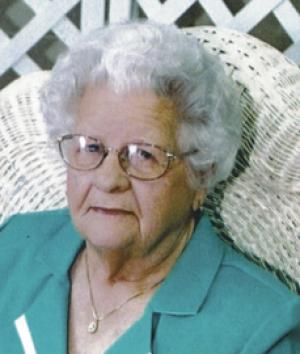 Glenda was united in marriage to Fay E. Reeves in 1934 at Erie. They were married 45 years before divorcing.

She was a housewife and owned and operated Reeves Laundry in Erie. Glenda and Fay owned Reeves Furniture and Antiques in Erie before moving the business in 1961 to Pittsburg on north Broadway.

Glenda lived by her values of self-reliance, honesty, humility, hard work, respect for others and a strong belief in God and her family. The prayer warrior has met her savior. She is happy to be with him in his house.

She was a woman of faith and a believer in prayer. Glenda loved to cook everyone’s favorite chicken and noodles, mac and cheese and peach cobbler. She was a quilter and handiwork lover. Watching her family grow was a real joy. She was always thinking of the other person.

Glenda was a 28-year resident of Highland Meadows in Pittsburg. She attended Trinity Baptist Church.

She is preceded in death by five brothers, Virgil, Howard, Loyd, Eugene and Leon, and four sisters Gladys, Letha, Susie and Edmadora.

A special thank you to Dorothy Hennessy and Via Christi Village for giving her loving care.