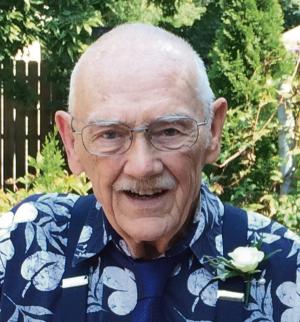 Harold Dean Pease, 83, Linn Valley, Kan., passed away Sept. 21, 2017, as a result of an automobile accident. Harold was one of seven children born to Glenn and Alice Pease, lifelong residents of La Cygne, Kan.
He graduated from La Cygne Rural High School, where his interests were football, track (especially hurdles) and music. He had a passion for hunting and fishing. He accepted Jesus at a young age and joined the Calvary Baptist Church.
Harold attended Ottawa University one year before joining the Air Force, serving four years. During that time (September 1954), he married his high school sweetheart, Norma Lee Keith. He graduated from Kansas State University in 1960 with an electrical engineering degree.
His first job was with Western Electric Field Engineering on the Titan One Missile Project. He worked on the ground guidance radar system. The missile sites were in different states requiring several moves by the family. He took a new position with the Naval Defense while in California. The naval project was shipboard anti-air defense missiles. After 10 years, he accepted a position in Arlington, Va., close to Washington, D.C. There he was a budget analyst for Naval Defense.
Upon retirement, the family moved back to the La Cygne area on the lake in Linn Valley, where he enjoyed his lifelong passions for hunting, fishing and golf. Fishing was made easy as he only had to go out his back door and catch them from his own dock.
Harold and Norma re-joined Calvary Baptist Church, where he faithfully served until his death. He enjoyed doing Meals on Wheels representing the church.
Harold was preceded in death by his parents; a brother, Kenneth Lee Pease; a sister, Lorene Ellen Allee; and brother Don Pease.
He is survived by his wife of 63 years, Norma; four children: Janet Bardin and husband Randall, Rodney Pease, Randy Pease and Jeff Pease; eight grandchildren: Ellis Bardin  and wife Kaitlin, Christian Bardin  and husband Brant, Tyler Pease  and wife Liz, Carter and Cameron Pease, and Weston, Noah and Mylee Pease; sisters Nadine Fritts-Kenney, Ruth Ann Potts  and husband Lyle, and Kathryn Nicholson; as well as a host of extended family and friends.
Funeral service will be held at 11 a.m. Friday, Sept. 29, 2017, at the Calvary Baptist Church in La Cygne. Burial will be in the Oak Lawn Cemetery. Visitation will be held from 5:30-7 p.m. Thursday at the Schneider Funeral Home and Crematory, La Cygne Chapel.
The family suggests contributions to the Calvary Baptist Church. Online condolences for the family can be left at www.schneiderfunerals.com.