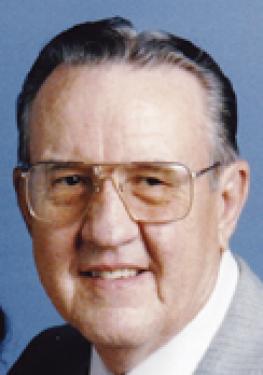 Harold Marvin Stephan, 88, passed away Dec. 12, 2014, at Wellington Place Assisted Living in Kennesaw, Ga. Marvin was born Jan. 10, 1926, in Nortonville, Kan., to Claude and Rose (DeLand) Stephan.
He entered the United States Army June 5, 1944, serving in France, Belgium and Germany. He was honorably discharged April 16, 1946.
Marvin enjoyed learning and received his bachelor’s degree from Ottawa University and then his master’s degree in education from the University of Kansas in Lawrence, Kan. He continued his life-long learning as a woodworker, bricklayer and as a student of the Bible. He spent 38 years as an educator within the Kansas Public School System as a teacher, superintendent and finally as a principal at Westwood Elementary School in Junction City, Kan., where he retired in 1988.
He was active in the communities where he lived as a member of Rotary, Kiwanis and as a music instructor for his church. Marvin enjoyed singing, playing golf, watching baseball and most of all, watching KU Jayhawk basketball. However, his greatest joy came from his grandchildren and family.
On May 21, 1944, Marvin married Hazel Maxine King in Oskaloosa, Kan. Hazel preceded Marvin in death Aug. 29, 2011.
Marvin was also preceded in death by three brothers, Mel, Wendel, and Harry; three sisters, Austa, Rosie, and Lila; one nephew whom he raised as a son, Dan Easthouse.
Survivors include two sons, Duane Stephan and wife Karen, of Marietta, Ga., Brad Stephan and wife Arleen, of North Richland Hills, Texas; one niece he raised as a daughter, Kay Easthouse Nowak and husband David, of Cape Canaveral, Fla.; one niece, Barbara Easthouse of Lawrence, Kan., surviving spouse of Dan; six grandchildren and seven great-grandchildren.
A memorial service will be held on Saturday, Jan. 10, 2015, at 1 p.m., at Schneider Funeral Home Pleasanton Chapel. The family suggests contributions to St. Jude Children’s Research Hospital in care of the funeral home, in lieu of flowers. Arrangements: Schneider Funeral Home Pleasanton Chapel.