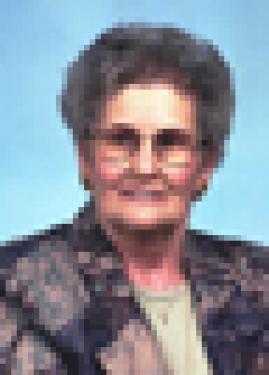 Ilo J. Brown, 86, Pleasanton, Kan., passed away Wednesday, Sept. 24, 2014. She was born at Farlinville, Kan., on Aug. 14, 1928, the daughter of Frank and Ula McDowell Murray. She graduated from Mound City High School in the Class of 1946.
She married Robert “Pat” Brown on May 11, 1947, at Pleasanton.
Ilo worked as secretary for Pleasanton High School for 32 years. She then worked for 13 years at the Linn County Extension Office. She was a member of the Pleasanton United Methodist Church, V.F.W. and American Legion Auxiliaries, and the Order of Eastern Star.
She was preceded in death by her husband, Pat, on Jan. 8, 1990; and brothers, Walter and William Murray.
She is survived by her son, Morgan Brown and wife Marsha; grandsons, Tyler and Ryan Brown; and great-grandchildren, Derek, Ethan and Kenneth.
Funeral service was held Saturday, Sept. 27, 2014 at the Schneider Funeral Home and Crematory, Pleasanton Chapel. Burial was in the Pleasanton Cemetery. The family suggests contributions to the Pleasanton United Methodist Church. Online condolences for the family may be left at www.schneiderfunerals.com. Arrangements: Schneider Funeral Home and Crematory, Pleasanton Chapel.