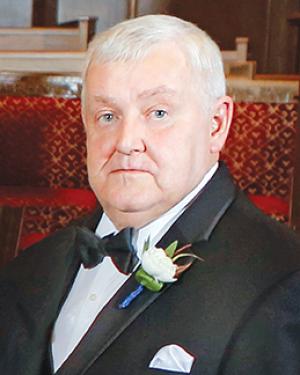 James Allen Johnson, age 72, of Pleasanton, Kan., passed away on Saturday, July 24, 2021, at the University of Kansas Medical Center in Kansas City, Kan., after a brief illness.

Allen was born on July 7, 1949, at Moran, Kan., the son of Leroy Robert Raymond Johnson and Ruby Matilda (Nelson) Johnson. He grew up in the Elsmore, Kan., area and attended Elsmore Grade School and graduated from Marmaton Valley High School in 1967. Allen was an outstanding athlete and played football, basketball and baseball. He graduated from Allen County Community College and received a bachelor of education degree from Pittsburg State University. He taught and coached in various schools in Kansas for many years. After his teaching career, he worked in sales and manufacturing.

Allen married Terri Lynne Wilson on Oct. 25, 1987, in Elsmore. They were blessed with two sons, Daniel Joseph and Samuel Dean. Allen loved his family and was so proud of his sons and their families. He loved his grandchildren, Kipling Alan, Ivy May and Olivia Ann. Allen was always an unwavering supporter of his wife and always stood by her side.

Allen was a sports fan, particularly of the Kansas City Chiefs and Kansas City Royals.  He was very interested in world events and enjoyed watching the History Channel and Fox News. He also loved visiting with friends and family and in recent years particularly enjoyed going to the Elks Lodge in Nevada, Mo., with friend Richard Perry.

Rev. Kevin Moyers and Pastor Ralph Peters will conduct funeral services at 11 a.m. Friday, July 30, at the Elsmore United Methodist Church. Burial will follow in the Elsmore Cemetery. The family will receive friends from 5-7 p.m. Thursday at the Cheney Witt Chapel.  Memorials are suggested to the Elsmore United Methodist Church and may be left in care of the Cheney Witt Chapel, 201 S. Main, P.O. Box 347, Fort Scott, Kan. 66701.