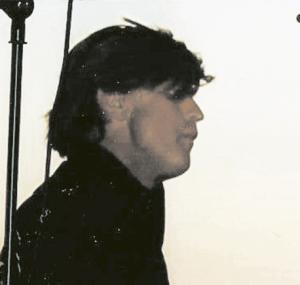 Linn County News
Published June 7, 2017
Jared Bliss Warrick, age 46 of Parker, Kan., died Saturday, May 27, 2017, at North Point Skilled Nursing in Paola, Kan.
Jared was born June 30, 1970, in Anchorage, Alaska. He was the youngest of four children born to Herman E. & Charlotte Launita (Maycumber) Warrick.
He grew up and attended school in the Prairie View school district. He graduated with the Prairie View High School Class of 1988.
After high school, Jared went to work in Olathe for a while before moving to Florida to pursue his music career. He moved to the Tampa Bay area and attended Keiser University, majoring in computer science. He graduated with honors on the Dean’s List with his associate’s degree.
Jared’s passion for playing the drums started at 10 years old, and it became his whole life. He played the drums for many bands over the years, including Eastland Rage, Blinding Darkness, and Jeff Vitolo & the Quarter Mile Rebels. He would play anything, but Rock & Roll and Rockabilly were his favorite genres. He loved to host dinners and cook for people. He was an all-around entertainer.
His hobbies included fishing and playing golf. Jared worked various jobs while not traveling with the various bands. He was a family man and would visit them whenever he could. He always brought his own spice and personality to the family gathering.
He attended the First Church of the Nazarene in Anchorage until 1980 when they moved to Parker, and then he attended his Grandma Maycumber’s church, Osawatomie Wesleyan Church.
He is preceded in death by his father and infant sister Jennifer Lynn Warrick.
Survivors include his mother Charlotte Warrick of Parker; brother Jason (Laronda) Warrick of Parker and sister Catherine (Robert) Cox of Spring Hill, Kan.; niece Christina (Nick) Wilson of Osawatomie, Kan.; eight great nephews and nieces Jace, Noah, McKinley, Larson, Katlyn, Karley, Kiersten and Chrisalynn; Uncle Harold (Carolyn) Maycumber of Astoria, Ore., and Aunt Dolores Sperry of Parker;  along with other family and many friends.
Service was Saturday, June 3, 2017, at the Eddy-Birchard Funeral Home. Burial was at Osawatomie Cemetery.
Memorials are to the Jared Warrick Memorial Fund and may be sent c/o Eddy-Birchard Funeral Home, P.O. Box 430, Osawatomie, KS 66064.