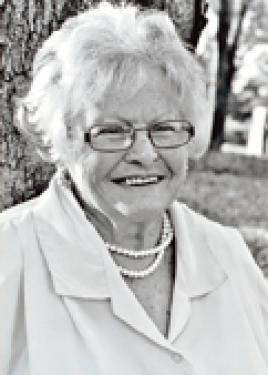 Joan Toms, 80, Mound City, Kan., passed away Saturday, Feb. 21, 2015. She was born May 1, 1934, at Howard, Kan., the daughter of Harold and Grace Crumrine Roberman. She graduated from Lawrence, Kan. High School and attended Business College for two years.
She married John Toms who preceded her in death in March of 1969.
She worked as a dispatcher for the Linn County Sheriff’s Department before retiring. She also worked for her son, Terry, at Precision Auto Parts. Joan was well known for her cake and fudge making. She was a member of the Order of Eastern Star, where she held the office of Chaplain for many years. She was an avid KU and Royals fan. She attended her first Royals game Sept. 11, 2014. She loved her grandkids and attended all their school and sports activities.
She was preceded in death by her parents.
She is survived by one son, Terry Toms and wife Janet and Janet’s sister JoAnn Stainbrook, who held a special place in her heart; stepson Jack Toms; three grandchildren, Tara Toms, Justin Toms and wife Theresa, and Jason Toms and wife Ashley; and seven great-grandchildren, Aiyana, Jayce, Teyah, Jaylin, Jaxson, Aedin and Azaiah.
Funeral service will be held at 10 a.m. Friday, Feb. 27, 2015 at the Pleasanton First Christian Church. Burial will be in the Oak Lawn Cemetery, La Cygne, Kan. Visitation will be held from 5-7 p.m. Thursday at the Schneider Funeral Home and Crematory, Pleasanton Chapel. The family suggests contributions to Linn County Care to Share. Online condolences for the family may be left at www.schneiderfunerals.com. Arrangements: Schneider Funeral Home and Crematory, Pleasanton Chapel.