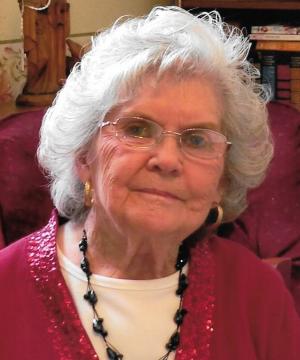 Lois “Jean” Johnston, 86, formerly of Amsterdam, Mo. passed away Tuesday, Aug. 4, 2015. She was born near Butler, Mo., the daughter of Homer and Agnes McElwain Dixon. She attended school in Amoret, Mo. where she enjoyed playing basketball.
She married Clifford LeVaun Johnston April 3, 1945. He preceded her in death June 9, 2003. Jean held many jobs during her time working. She started as a teenager catching the train in Amoret to work at a candy store in Kansas City. She later worked for Barney Kropp Feed Store in the late 1950s, as a bus driver for Miami-R1 from 1960 to 1983, ran the concession stands at Middle Creek Riding Club and the La Cygne Saddle Club, owned and operated the Amsterdam Cafe from 1976 to 1979, and worked at Bass Buster. Jean had a love for horses. Didn’t matter if it was riding horseback or in a wagon. Her strong work ethic and fondness of horses was surpassed only by her love for her family.
She was a member of the Merwin Christian Church and was a founding member of the Amsterdam Jubilee which began in 1976. She was also preceded in death by an infant son, Donald, a son Doug, and a sister Freeda Judd.
She is survived by two sons, Jerry Johnston and wife Kathy, Kip Johnston and wife Sandy; two daughters, Connie McGinnis and husband John, and DeAnna Hutton and husband Robin; 15 grandchildren, 37 great-grandchildren; thirteen great-great-grandchildren; and other extended family and friends, five of whom are her namesake.
Funeral service was held at Saturday, Aug. 8, 2015 at the Merwin Christian Church. Burial was in the Mulberry Cemetery. Contributions are suggested to Mulberry Cemetery or Merwin Christian Church. Online condolences can be left at www.schneiderfunerals.com. Arrangements: Schneider Funeral Home & Crematory, La Cygne, Kan.