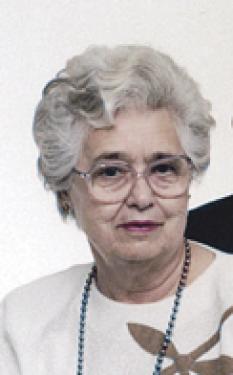 Maretta Nadine Jameson, 85, of Monett, Mo., passed away Wednesday, April 15, 2015, at Bentonview Park Health and Rehabilitation Center in Monett from complications of Alzheimer’s and a stroke.
Maretta was born Aug. 19, 1929, in Kansas City, Mo., the daughter of the late Elmer and Clara (Dunavan) Reinke. She attended Kansas State Teachers College at Pittsburg, Kan., and later Butler County Community College, in El Dorado, Kan. Maretta was employed as a schoolteacher, Sears sales clerk, and retired as a registered nurse from St. Francis Medical Center in Wichita, Kan. She lived in Wichita, Kan., for 60 years at the same residence and resided in Monett, Mo., for her last remaining years. Maretta was also a member of the First United Methodist Church in Monett.
On Jan. 15, 1949 in La Cygne, Kan., Maretta Reinke and Virgil Jameson were united in marriage. To this union, two children were born. Maretta and Virgil were blessed with over 66 years together.
Maretta is survived by her husband, Virgil, of the home; one son, David W. (Dave) Jameson, and wife Cathy, of Monett; one daughter, Rebecca (Becky) Blunt, and husband Daniel, of State College, Pa.; one brother, David Jackson, and wife Rosanne, of La Cygne; one sister, Ann Garrett, and husband Tom, of La Cygne; four grandchildren, David John Jameson, Christopher Jameson, Bonnie Blunt Mulkey and Jaymeson Blunt; as well as six great-grandchildren, Matthew Jameson, Hannah Jameson, Jett Jameson, Johnny Jameson, Jace Jameson and Kaylin Mulkey.
Funeral services were held Saturday, April 18, 2015 at Buchanan Funeral Home with Reverend Paul Lanning officiating. Graveside services followed at the Edna Cemetery in Edna, Kan. In lieu of flowers, memorial contributions may be made to the Alzheimer’s Association in care of the funeral home. Arrangements have been entrusted to Buchanan Funeral Home, Monett.