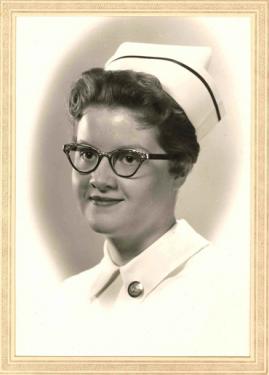 She was born March 21, 1937, in La Crosse, Kan., the daughter of Kurt and Clara (Pivonka) Weigand. Margaret graduated from Williamsburg High School and graduated with the class of 1955. She graduated from Sisters of Charity School of Nursing at Providence Hospital, Kansas City, Kan., in 1958.

Margaret served on the USD 346 school board for two terms. After moving to Garnett, she was a member of the Friends of the Library, the Holy Angels Altar Society, and volunteered at the ARC Thrift Shop.

She loved gardening, quilting, and cats.

She was preceded in death by her parents; husband, Frank Weber on July 18, 2015; and her twin sister, Mary Lee.

Memorial services will be held at 10:30 a.m., Saturday, May 7, 2016, at Holy Angels Catholic Church, Garnett. Family will greet friends one hour prior to the service at the church. Inurnment for Margaret and Frank will be held later that afternoon at Mount Calvary Cemetery, Ottawa, Kan.

Memorial contributions may be made to Friends of the Library.

You may send your condolences to the family at www.feuerbornfuneral.com.