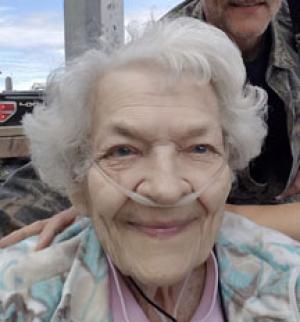 She married Jack Emerson. To this union two children were born, Thomas Kyle and Jacquelyn Irene. She later married Benjamin Harrison Fisler. He preceded her in death in 2001.

Marjorie worked in the banking industry as a bookkeeper and later as a secretary at United Airlines. She was a member of the Pleasanton First Christian Church.

She was preceded in death by her parents and a sister Bernadine Cerny.

Marjorie enjoyed sewing and gardening and loved communing with Mother Nature. She appreciated a spin through the Overland Park Arboretum several weeks before her death and mentioned several times how beautiful this world was.

She was a loving mother and grandmother and good friend to several. She regretted outliving many of her friends and loved her family to the end.