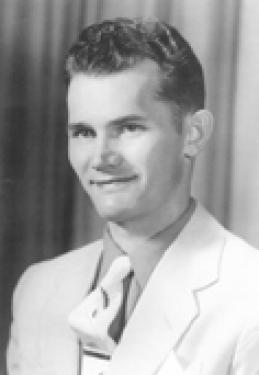 Olen Dale Callahan, age 88, was born Aug. 20, 1926, in Henry County, Mo., the son of Marion L. and Vianna E. (Wallace) Callahan. He passed away Oct. 8, 2014, at the Country View Nursing Home, Prescott, Kan.
The family moved to Linn County, Kan., in 1938 and Olen attended Antioch School and Pleasanton High School.
In 1944 he joined the U.S. Army and received basic training at Fort Walters, Texas; he served in the infantry and the Army Air Force during the German Occupation until 1948.
Olen was married on April 5, 1946, to Elsie Wiedeman in Wiesbaden, Germany. They returned to Linn County for a short time then moved to Kansas City, Mo., where he was employed at General Motors. They were the parents of two children, Ronald E. and Peggy Jean. The family moved to California where Olen worked in the Automatic Sprinkler Industry until 1978 when he was injured at work, falling 30 feet from a beam, receiving a concussion and multiple skull fractures which caused lifelong health issues.
Olen’s wife, Elsie, passed away and also his son, Ron.
For several years he helped in his brother’s shop, Bob’s Sprinkler Co., before moving to Oregon to live with his daughter, Peggy, and husband, Terry Weir. Unfortunately, Peggy passed away at the age of 55 and Olen was left alone until 2010 when he moved to Pleasanton to be near his brothers and sisters.
He was preceded in death by his parents; two sisters, Vivian Steiner and Faye Cowley; and two brothers, James Robert “Bob” and Lee Callahan.
He is survived by two brothers, M.G. “Jerry” Callahan of Gardner, Kan., and Wallace Callahan of Scottsdale, Ariz.; three sisters, Ola May Earnest of Pleasanton, Katie Holmes of Tulsa, Okla., and Mary Lou Cox of Independence, Mo.; and one grandson, Joshua Callahan of Spokane, Wash.
There will be a visitation Sunday, Oct. 19, 2014, from 2 p.m. until service time at the Schneider Funeral Home and Crematory, Pleasanton Chapel. In lieu of flowers, the family suggests contributions to Mercy Hospice, which may be sent in care of Schneider Funeral Home, P.O. Box 525, Pleasanton, KS 66075. Online condolences may be left at www.schneiderfunerals.com.