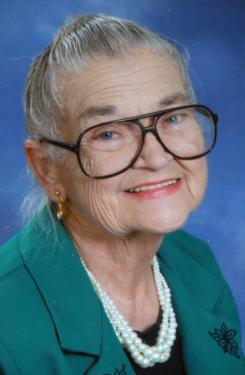 Ona Katherine “Katy” Holmes was born on April 5, 1934, to Marion and Anna Callahan in Deepwater, Mo. She and her twin sister, Ola May, were eight and nine of 10 children.

They joined and were active members of Southwest Baptist Church where they served and attended for 59 years. Katy worked with preschool children who brought her much joy and sang in the choir, as well as small ensembles, for many years.

Katy and Bob raised German shepherds, specializing in white. Katy served as the president of the White German Shepherd National Club for 20 years. Many of their dogs were purchased and trained as K-9 police dogs.

She is preceded in death by her husband, Robert; her eldest son, Steve; and six siblings.