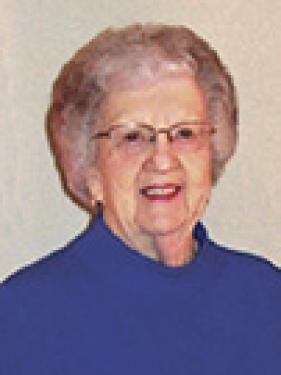 Funeral services were scheduled at 10:30 a.m. Saturday, Jan. 15, 2022, at Williamsburg United Methodist Church, Williamsburg. Family was to meet with friends from 10-10:30 a.m., prior to service hour. Interment was to be in Mt. Hope Cemetery, Williamsburg.

Reta was born Sunday, April 4, 1926, in Blue Mound, Kan., the daughter of Robert Renfrew and Levah (Campbell) Boyd. She grew up in Blue Mound and moved to Mound City, Kan., at the age of 19, and to Williamsburg in 1981. She graduated from Blue Mound High School with the class of 1944.

Reta worked 35 years as an office clerk for the United States Department of Agriculture retiring in 1981. She was a member of Williamsburg United Methodist Church, Order of Eastern Star, Sadana, Chapter #194, Tequa EHU and Past Matrons Club of Eastern Star.

She enjoyed being active in the church and was instrumental in the formation of W.inG.S., Workers in God’s Service, at the Williamsburg United Methodist Church. Reta also enjoyed spending time sewing, knitting, crocheting and playing the piano.