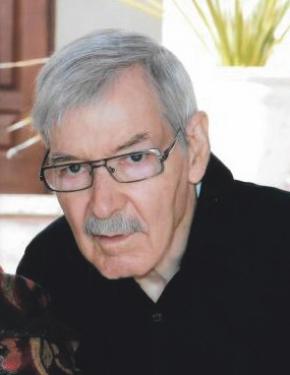 Richard Kenneth Wade was born in a home in La Cygne, Kan., on April 29, 1934, to Ray Valentine and Letha Pearl Hensley Wade. He was the 10th child in the family.

He attended elementary and high school in La Cygne and La Cygne Rural High School, graduating in the class of 1952. He attended the University of Kansas and graduated from its Pharmacy school in 1957. He was inducted directly in the U.S. Army and spent two years there. On Oct. 17, 1959, he married Elsa Jane Prike. At that time, he was a pharmacist with Osco Drug Co. in Kansas City and Topeka. He was recalled into the army in 1961, was released in August 1962 and then he began to work at Meeks drug store in Osawatomie, Kan., then bought the drugstore. After selling Meeks he worked as a pharmacist for the Veterans Administration and retired in 2006. He lived on the family farm for 57 years.

He is the father of two children, Michelle Marie Wade (Leon Searl) and Michael Alan Wade (Christine) and grandfather to Dominic and Isabella. His fame in LRHS was being a star basketball player.  He was quick and agile and still remembered every game.  You couldn’t stump him on a quiz of college mascots. KU basketball was his favorite sports team. He enjoyed following and discussing the stock market. The ultimate DIY guy, he was known for driving timeworn vehicles that he worked hard to keep running. The perfect time to begin work on a carburetor was 10 p.m. at night on the dining room table. He loved long road trips and enjoyed the adventure of camping in out of the way places. He loved chocolate. While in the nursing home, the nurse wanted to trim his eyebrows. He would only let her do it in exchange for a piece of chocolate cake, which wasn’t on the doctor-prescribed diet. She found a piece of chocolate cake, and the deal was made.

Graveside funeral service was to be 2 p.m. Tuesday, Jan. 11, 2022, at the Riverview Cemetery, La Cygne, Kan. Individual respects and guest registry could be made from 9 a.m.-4 p.m. Monday, Jan. 10, at the Schneider Funeral Home and Crematory, La Cygne Chapel.