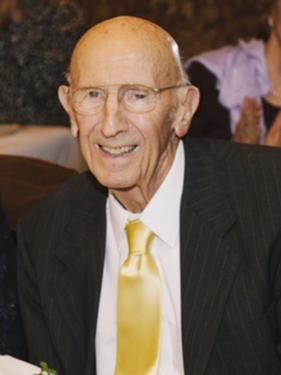 Linn County News
Published Aug. 8, 2018
Robert F. Bruce, 86, of Overland Park, Kan., went to be with his Lord on Aug. 4, 2018. Bob was the only son to Jessie (Brown) and Delbert Bruce, born Feb. 9, 1932, at their home in Mound City.
Following his graduation from Mound City High School in 1950, Bob attended the University of Kansas where he proudly graduated with a degree in civil engineering in 1955.
He served as a lieutenant in the Air Force from October 1955 to October 1957 at Clinton-Sherman AF Base, Oklahoma.
Bob’s first and only professional job was with HNTB (1955), where he enjoyed an outstanding 45-year career, retiring in 2001. After starting in Kansas City, his career with HNTB sent him and his family to several states, including Louisiana, Texas and California. Bob and Helen would eventually return to Overland Park, where they had raised their young family and built lifelong friendships.
Bob married the love of his life, Helen (Murray) Bruce in 1955, at Mound City. Bob and Helen’s proudest accomplishment was raising their three children, Jack, Charles (Chuck) and Julia (Julie).
Bob was a loving father and husband and is survived by his sister, Mary Ann Jamison (Fort Scott, Kan.); his wife of 62 years, Helen Bruce; and his three children and their spouses, Jack and Stephanie Bruce of Jacksonville, Fla., Chuck and Kayla Bruce of Leawood, Kan., and Julie and Alvie Nichols of Pflugerville, Texas. Bob was a caring grandfather to his five grandchildren, Rebecca Comeaux, Robert Bruce, Anne Heart, Kimmie Bruce and Danny Bruce; and his four great grandchildren, Olivia Bruce, Dylan Bruce, Jove Heart and Estelle Comeaux.
Bob will be remembered for his professional accomplishments in designing highways, bridges and airports throughout the U.S. as well as his dedicated service to Faith Chapel Assembly of God Church, the Gideons International (Johnson County South Camp) and Boy Scouts of America.
Bob was simply a great man. He was a compassionate, caring person, focused on ways so he could be helpful to others. He was always positive, looking for the bright side of any situation. There was no role he enjoyed more than leading his family as father, grandfather, brother, uncle and husband. Above all else, he will be remembered for his abiding faith in God, his kind spirit, generosity and his thoughtfulness. He remains a model of humility, loyalty and optimism for so many. The world is truly a better place because he was in it.
Bob Bruce, you were a good and faithful servant to God. Enter into the joy of your Lord!
Funeral Service will be held at 11 a.m. Friday, Aug. 10, at Faith Chapel Assembly of God Church in Overland Park. Visitation will be held from 10 a.m. to service time at the church. Burial will be at Woodland Cemetery in Mound City at 3 p.m.
The family suggests contributions to Faith Chapel Assembly of God or Gideons. Contributions may be sent in care of the funeral home to Schneider Funeral Home and Crematory P.O. Box J, Mound City, KS 66056. Online condolences may be left at www.schneiderfunerals.com.