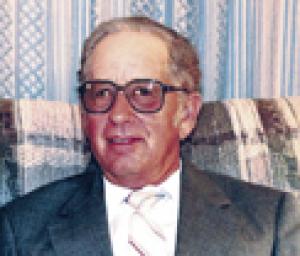 William Sherman “Bill” McCoy, age 81, Pleasanton, Kan., passed away on Monday, Oct. 13, 2014. He was born at Linnville, Kan., on June 7, 1933, the son of Harold and Viola Elrod McCoy. He graduated from Mound City High School.
He served his country in the United States Army. Bill worked in highway maintenance for the state of Kansas, and was a farmer and a rancher.
He married Darlene Brown on June 18, 1973. He was a member of the American Legion Hewitt New Post #248, Masonic Lodge in Mound City, and enjoyed square dancing with Darlene in the Mound City Ramblers and Iza Stompers clubs. He and Darlene were also active in bowling.
He was preceded in death by his parents; two infant sons; one infant daughter; and a sister, Jean Nichol.
He is survived by two sons, Charles and Steve McCoy; a daughter, Kerry McCoy; one granddaughter; two great-grandchildren; two stepsons, Jim and Tom Ridge; two stepdaughters, Linda Nation and Shirley Snyder; 12 step grand; and 10 step great-grandchildren.
Funeral service will be held 2:30 p.m. Friday, Oct. 17, 2014, at the Schneider Funeral Home and Crematory, Pleasanton Chapel. Burial will be in the Linnville Cemetery. Visitation will be held from 5-7 p.m. Thursday at the chapel. Contributions are suggested to the Parkinson’s Foundation. Online condolences for the family may be left at www.schneiderfunerals.com. Arrangements: Schneider Funeral Home and Crematory, Pleasanton Chapel.