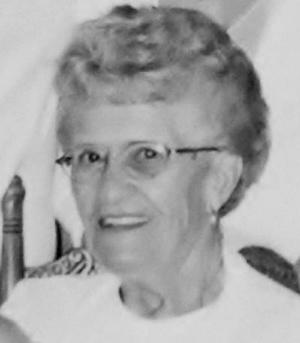 Ardell Hearn, 91, passed away peacefully with her family by her side at home on March 3, 2017, in Parker, Ariz.
She was born one of seven children on May 9, 1925, to Willard and Faye “Pearl” Bush at the family home in Walnut, Mo., along with Myrth “Monty,” Vina Mae, Mavis, Margory, Willard Leon and James.
She married Paul Stark in the 1940s and had five children, Frank, Sherry, Danny, Margie and Johnny Stark.
She later relocated from southern California to Pleasanton, Kan., and remarried Philip Hearn and gained his five children, Jerry Lee, Paulette, Betty, Claudette and Steven Hearn.
She worked hand in hand in their family business, Hearn’s Wrecking Yard in Pleasanton and enjoyed quilting, crocheting, crossword puzzles and her grandchildren. Her favorite pastime was to play the slot machines at the Bluewater Casino in Parker, Ariz.
She is survived by her children, Frank (Sharon) Stark and Sherry Oelrich of Cherry Valley, Calif., Dany (Pam) Stark, Margie Beckham and Johnny (Tami) Stark of Parker, Ariz., Paulette Bennett, Betty Stark and Jerry Lee Hearn of Kansas; along with 22 grandchildren, 41 great-grandchildren and 11 great-great-grandchildren.
She is preceded in death by her parents Willard and Faye Bush; husband Philip Hearn; two brothers, Myrth and Leon Bush; two sisters, Vina Mae Cox and Mavis Smith; two children, Claudette Pennington and Steven Hearn; and four grandchildren, Nina Stark, Randy Morris, Jody Beckham and Jesse Stark.
Arrangements were handled by Parker Funeral Home.
A Celebration of Life was held at Bluewater Casino & Resort, Parker, Ariz., on Saturday, March 11, 2017, honoring her life. A graveside service was to be held at a later date in her hometown of Pleasanton.