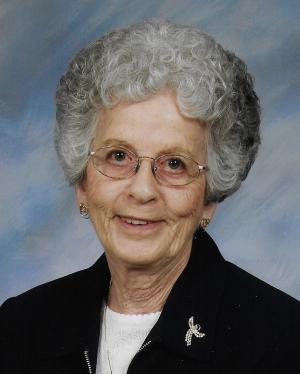 Arlene Snow, age 92, Mound City, passed away on Sunday, Dec. 2, 2018, at her home. She was born on Sept. 17, 1926, at Mound City, the daughter of Chester A. and Fallie DeMott Nickelson.
She was united in marriage to Frank Wilford “Bill” Snow on Oct. 25, 1942, at Mound City. He preceded her in death on Sept. 22, 1987.
Arlene worked at Stoughton’s Shoe Store, Big Dollar Surplus and Prescott Country View. She attended the Methodist Church. She was a member of the Order of Eastern Star and the Red Hat Society and enjoyed playing cards.
She was also preceded in death by an infant son, Frankie Lynn Snow, and a son, Wilford Leon “Butch” Snow; and two sisters, Dollie Jamison and Ruth Cosens.
Arlene is survived by a son, Larry Snow and wife Judy; a daughter-in-law, Sharon Snow Ala; four grandchildren, Angela Johnson, Tina Stillians, Frank Snow and Art Snow; seven great grandchildren, Jake, Haley, Tyler, Lacy, Taylor, Tanner and Brooklyn;  and one great, great granddaughter, Sophee Mae, and soon to be great, great grandson, Beckett Stockton.
Funeral service will be 2 p.m. Thursday, Dec. 6, 2018, at the Schneider Funeral Home and Crematory, Pleasanton Chapel. Burial will be in the Mount Carmel Cemetery near Mound City. Visitation will be held from 5 -7 p.m. Wednesday at the Pleasanton Chapel.
Contributions are suggested to Linn County Care to Share. Online condolences for the family can be left at www.schneiderfunerals.com.