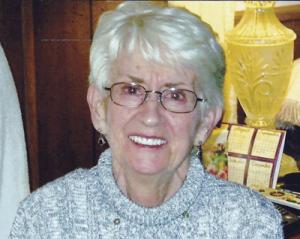 Audrey T. Hallam – 85 years old and Afton, Okla., resident (Woodland Shores) – passed away on Sunday, Nov. 20, 2016, at the Grove Integris Hospital.
She was born on Nov. 18, 1931, in St. Cloud, Minn., to Regina A. (Palmershiem) and John L. Thell. Audrey attended school at Foley, Minn.
She had worked at Collins Radio in Cedar Rapids, Iowa, for 20 years retiring in 1987. She had also worked at Univac in St. Paul, Minn.; Kustom Electronics in Chanute, Kan.; King Radio in Paola, Kan.; and as hostess and cashier at Trading Post, Kan.
Audrey was married to Gordon Duncan Jr. in 1952 in Mayhew Lake, Minn., and then later to Ed Roling in 1969 in Miami, Okla. In 1988 she married Bill Hallam, who passed away in 2005.
Audrey was a member of the St. Francis Catholic Church in Langley, Okla. She enjoyed working in her yard and doing flowers, crocheting and had been an avid NASCAR fan since the 1950s.
Preceding her in death were her husband; a son, Howard Duncan; a brother, John “Jack” Thell; a sister, Delores Thell; and her dogs, Cricket and Molly.
The family includes her children, Gordon “Gordy” Duncan III and wife Jenifer of San Antonio, Charles “Chuck” Duncan and wife Jacque of Pawhuska, Okla., and Linda Romine and husband Larry of Buckley, Wash.; daughter-in-laws Deanna and Stephanie of Bartlesville, Okla.; brothers Richard “Dick” Thell of Sauk Rapids, Minn., Butch Thell of Foley; sisters Rose Mary Dittmer of Delta, Colo., and Annette Steiner of St. Paul; five grandchildren; two great-granddaughters; and her dog, Lady.
The rosary was held Sunday, Nov. 27, 2016, at the Luginbuel South Grand Lake Chapel in Langley.
The funeral mass was held Nov. 28 at the St. Francis Catholic Church in Langley. Father Celestine Obidiegwu officiated. Interment followed at the Piqua Cemetery west of Iola, Kan.
Online condolences may be made at www.honoringmemories.com. Arrangements are by the Luginbuel South Grand Lake Funeral Home of Langley.