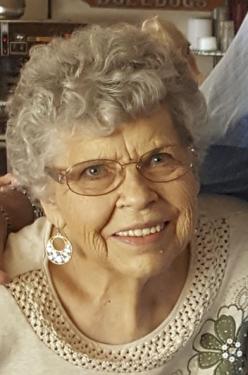 On Nov. 26, 1950, she married her sweetheart of four years, Floyd Dean Mitchell. They were blessed with two daughters.

Barbara enjoyed working alongside her husband on their farm north of Blue Mound. They received the conservation award in 1977. Barbara continued to run the farming operation after her husband’s death. Barbara loved to travel with her husband and daughters on summer vacations. These were special times for her and her family.

Barbara was an active member of the Blue Mound United Methodist and the UMW for many years. It had been a recent goal and project of Barbara’s to revitalize the Northway Family Cemetery.

In 1998, Barbara married Roylance Henry Petrie of Blue Mound. He passed away later that year.

Barbara was a devoted wife and loving, caring mother. She went to her eternal home on March 18, 2019, but will live on always in the hearts of her family and loved ones.

Barbara was preceded in death by her parents, husbands and sister Betty Mitchell.

Funeral service was held Saturday, March 23, 2019, at the Blue Mound United Methodist Church. Burial was in the Sunny Slope Cemetery.

Contributions may be made to: the Blue Mound United Methodist Church or the Northway Cemetery. Online condolences can be left at www.schneiderfunerals.com.