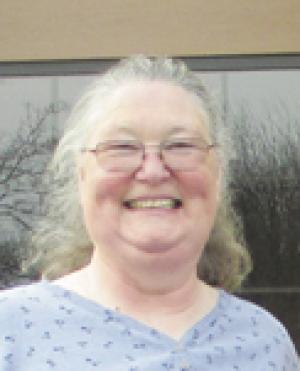 Berna Dee Bradley, 68, Blue Mound, Kan., passed away Nov. 9, 2014. She was born Sept. 24, 1946, at Moran, Kan., the daughter of Clarence and Helen Emmons Townsley.
She was a graduate of Blue Mound High School and Allen County Community College.
She was united in marriage to Tom Bradley Sept. 9, 1966. They then moved to Manhattan, Kan., and Tom attended and graduated from Kansas State University and Berna received her PHT (Putting Hubby Through) degree. Together they owned and operated Bradley’s Grocery from 1983 until October of 2014.
Berna was a member of the Blue Mound United Methodist Church and was president of the Mooney-Long American Legion Auxiliary Unit #279. She had been involved in the Blue Mound July 4th Celebration and was a leader in the Lucky Ridgers 4-H club.
She and Tom enjoyed traveling and had taken trips to Hawaii, Alaska and the Pacific Northwest, to mention a few.
She is survived by Tom, her husband of over 48 years; two daughters, Deanne Jackson and husband Leland, and Marri Krupco and husband Matthew; her parents, Clarence and Helen Townsley; two brothers, Gene and Howie Townsley; a sister, Loretta Murrow; and three grandchildren, Carlyn and Wyatt Jackson and Dara Eaton.
Funeral service will be at 11 a.m. Wednesday, Nov. 12, 2014, at the Blue Mound United Methodist Church. Burial will follow in the Pleasant View Cemetery.
The family suggests contributions to American Legion Auxiliary c/o Schneider Funeral Home, P.O. Box J, Mound City, KS 66056. Online condolences for the family may be left at www.schneiderfunerals.com. Arrangements: Schneider Funeral Home and Crematory, Mound City Chapel.