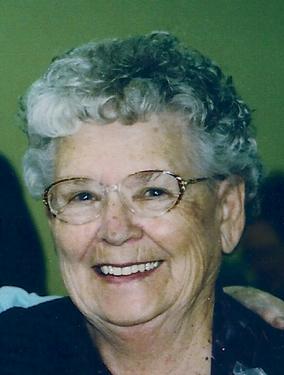 Bertha Alma White, age 94, La Cygne, Kan., passed away on Sunday, April 30, 2017, at the Louisburg Health Care. She was born in Osawatomie on Dec. 27, 1922, the daughter of Jesse Evans and Delvina Bates.
She graduated from Osawatomie High School.
She married Reuben Haight. To this union, four children were born. She later married Homer White, who preceded her in death.
She was a seamstress and a member of the International Ladies Garment Workers Union. Bertha was also a member of the La Cygne Christian Church. She enjoyed traveling and playing pitch and canasta.
Bertha was also preceded in death by her parents; a sister, Esther Vink; and one grandchild.
She is survived by a son, Roger Haight and wife Donnis; three daughters, Shirley Roberts, Barbara Pemberton and husband Herb, and Terry Powell; one sister, Joanna Burchett; and nine grandchildren, 18 great-grandchildren and eight great-great-grandchildren.
Funeral service will be 2 p.m. Wednesday, May 3, 2017, at the Schneider Funeral Home and Crematory, La Cygne Chapel. Burial will be in the Lane Cemetery. Visitation will be held from 1 p.m. to service time at the chapel.
The family suggests contributions to Ascend Hospice or the La Cygne Christian Church. Online condolences for the family can be left at www.schneiderfunerals.com. Arrangements: Schneider Funeral Home and Crematory, La Cygne Chapel.