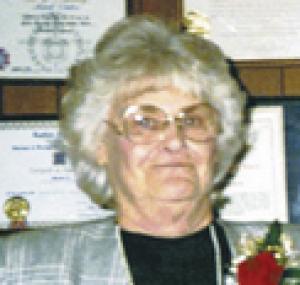 Betty Lou Davis, 87, Pleasanton, Kan., passed away Friday, Dec. 5, 2014. She was born April 2, 1927, at Pleasanton, Kan., the daughter of George and Nancy Elkington New.
She married William Davis March 29, 1947 in Kansas City, Kan. He preceded her in death July 23, 2005.
She worked at Central Armature & Electric and rebuilt alternators. She loved traveling, fishing, camping and family gatherings.
She was preceded in death by her parents; a brother, Albert; and two sisters, Ruby and Georgia.
She is survived by three sons, Gary Davis and wife, Constance of Lone Jack, Mo., Donnie Davis and wife, Leslie of Raytown, Mo., Ronnie Davis of Raytown, Mo.; and three daughters, Terry Jones and husband, Bill of Pleasanton, Sharon Jordan and husband, David of Overland Park, Kan., and Billie Mabry and husband, Jim of Jacksonville, Ill.; one sister, Shirley Akers; 20 grandchildren; 30 great-grandchildren, with two more on the way; and 22 great-great-grandchildren.
Memorial service will be held at 11 a.m., Thursday, Dec. 11, 2014, at the Schneider Funeral Home and Crematory, Pleasanton Chapel. Visitation will be held from 10 a.m. until service time on Thursday, Dec. 11, 2014, at the Schneider Funeral Home and Crematory, Pleasanton Chapel. Online condolences for the family may be left at www.schneiderfunerals.com. Arrangements: Schneider Funeral Home and Crematory, Pleasanton Chapel.