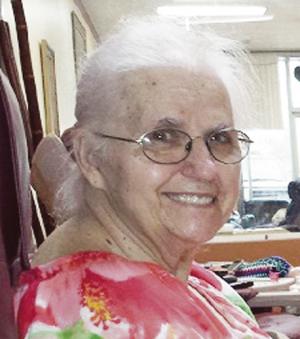 Carol Jean Anderson, age 78, formerly of Mound City, Kan., passed away on Monday, Sept. 4, 2017. She was born on Nov. 26, 1938, in Kansas City, Kan., the daughter of Adrian and Josephine Lamphear Loomis. She worked at Bethany Medical Center in food service and radiology for over 30 years before retiring.
She married Robert Eugene Anderson on Oct. 29, 1955. He preceded her in death on Dec. 23, 2004. She was also preceded in death by a son, Kenny Anderson; two brothers, Adrian and Glenn.
Carol Jean is survived by three sons, Robert Anderson Jr., Steven Anderson Sr., and Travis Anderson; two daughters, Cynthia Anderson-Schneider and Denise Chaparro; two brothers, Russell and Claude; and four sisters, Betty Jo, Janie, Claudia and Mary Helen; 19 grandchildren and 19 great-grandchildren.
Funeral service was Sunday, Sept. 10, 2017, at the Schneider Funeral Home and Crematory, Pleasanton Chapel. Burial was in the Woodland Cemetery. The family suggests contributions to the American Cancer Society. Online condolences for the family may be left at www.schneiderfunerals.com. Arrangements: Schneider Funeral Home and Crematory, Pleasanton Chapel.