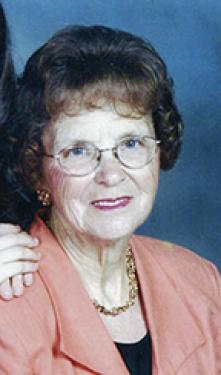 Catherine Maxine Maris, 87, of La Cygne, Kan., passed away on Wednesday, June 1, 2016, at Medicalodge Nursing Home in Butler, Mo. Born Dec. 3, 1928, in Paola, Kan., and raised in Jingo, Kan., she was a daughter of the late Harold Eugene Mendenhall and Ruby Francis Driskell-Mendenhall.

Maris graduated in 1946 from La Cygne Rural High School. She attended Ursuline Academy where she received her teaching certificate and continued her education at Baker University. She later on received her master’s in teaching from Pittsburg State University.

She worked in multiple one-room schoolhouses starting in 1946 at Sunny Ridge. She continued her teaching career at 96, Prairie Home and Fontana Elementary School, and retired with 31 years of service in teaching at La Cygne Elementary School in 1994. She took a break from teaching from 1962 to 1977 to raise her children and help out with the daily activities of her and her husband’s Grade A dairy farm.

Maxine was a member of the Eastern Star, Linn County Republican Women, E.H.U. and P.E.O. She was a 4-H leader and was involved in multiple community activities including planning for the annual La Cygne Fiesta and Christmas caroling around the town each December. She was an avid bridge player and loved to golf, attend Kansas City Chiefs football games and support her grandchildren in multiple 4-H and FFA activities. She was also a devoted member of the La Cygne United Methodist Church and La Cygne United Methodist Women.

Maris was married to the late Ashley J. Maris on Aug. 3, 1952. She had two children, the late Sheryl Rae Maris and Mark Ashley Maris of Gardner, Kan. Also surviving are grandchildren, Michael Maris of Gardner, Kirsty Hartley of Salina, Kan., Taylor Morrison, great-granddaughter Bexleigh Morrison of Hume, Mo., and Dacota Maris of Butler, Mo. She is also survived by one sister, Illene Kettler of Paola, Kan.; and one brother, Eugene Mendenhall of Linn Valley, Kan.

Services were held Monday June 6, 2016, at the La Cygne United Methodist Church with the Rev. Don Gaffney officiating. Interment was in the Oak Lawn Cemetery.