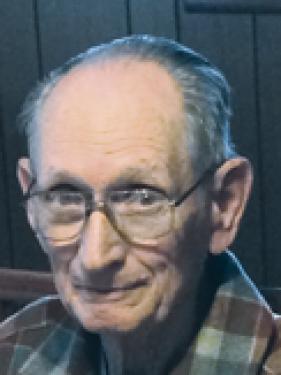 Charles A. Smith, age 88, of Pleasanton, Kan., passed away on Saturday, May 23, 2015, at Prescott Country View. He was born at Mound City, Kan., on Jan. 31, 1927, the son of Ralph and Lucy Dingus Smith.
He graduated from Pleasanton High School and furthered his education at Pittsburg State University obtaining a Bachelor’s Degree in Education and a Master’s Degree in Trade & Industrial Education.
He married Bonnie Wilson on Oct. 24, 1946, at the Linn County Courthouse.
Charles proudly served his country in the United States Army during World War II. He worked in education, spending most of his career in Leavenworth, Kan., at Fort Leavenworth USDB teaching inmates a skilled trade or helping them obtain a G.E.D.
He and wife Bonnie enjoyed traveling. He was a Webelo leader, a member of the First United Methodist Church in Leavenworth and the Pleasanton HUD Housing Committee, a volunteer at the Linn County Museum, and a member of American Legion Hewitt-New Post at Mound City and the V.F.W. He enjoyed woodworking, could fix most anything and even invented several useful gadgets and machines.
He is survived by his wife, Bonnie; sons Mark, Kevin and Dennis; daughters Beverly Miller and Brenda Jacobs; and a brother, Delmer Smith.
Funeral service will be held at 11 a.m. Friday, May 29, 2015, at the Schneider Funeral Home and Crematory, Pleasanton Chapel. Burial will be in the Pleasanton Cemetery. Visitation will be held from 5-7 p.m. Thursday at the Pleasanton Chapel.
Contributions are suggested to PSU Foundation, College of Technology. Online condolences for the family may be left at www.schneiderfunerals.com. Arrangements: Schneider Funeral Home and Crematory, Pleasanton Chapel.