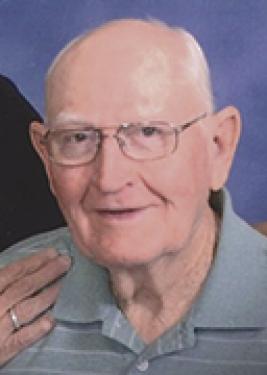 Charlie was an entrepreneur who spent his life building an agricultural empire in conjunction with his family. Walter Dunlop & Sons was his first family owned farm with his father and brother Raymond. The Parker Hardware Store and Elevator was purchased in the 1960s with his brothers. In 1965, Walter Dunlop & Sons purchased the land which became the Dunlop Fruit Farm. The Dunlop Fruit Farm served the community and beyond for almost two decades. In the 1980s, Walter Dunlop & Sons was changed to Dunlop Farms, Inc., a family farm that is now seeing a fifth generation of Dunlop farming in Linn County. Charlie spent decades working alongside his father, siblings, children and grandchildren. Farming and family were at the center of his life.

In his free time, Charlie enjoyed a variety of activities. There are many family stories about his prowess during a lively game of pitch, pool or ping pong. Charlie enjoyed fishing in local ponds and even traveled to Canada and Texas to enjoy other fishing venues. Charlie enjoyed hunting and his yearly hunting exchanges with lifetime friends from western Kansas and Colorado. Later in life, Charlie enjoyed gardening and canning with his wife Carolyn and “snowbirding” winters in Texas. Charlie was an avid fan of the Chiefs football, KU basketball and any activity in which his children or grandchildren were involved. He was a passionate supporter of Fox News and sports commentary.