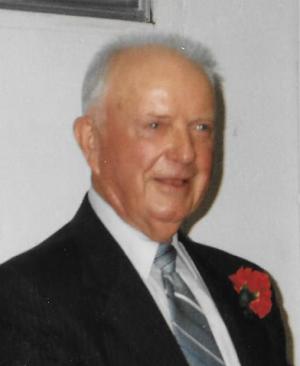 Delmer Herman “Fergy” Ferguson, 98, passed away Sunday, Aug. 23, 2015, at his home near La Cygne, Kan. He was born in Warsaw, Mo., Dec. 13, 1916. Delmer was the oldest of four children born to Clyde Ferguson and Mildred Cobb.
He moved with his parents to Kansas City, Kan., in 1923 and graduated from Argentine High School in 1935 and received a basketball scholarship to Kansas State University.
Delmer married Lillian Vivian Girten June 4, 1945 at Kansas City, Kan. She preceded him in death June 22, 2008.
He began his 41-year career at Colgate-Palmolive-Peet in 1934. He served his country in the United States Army during World War II. He was wounded in action in Italy and was a recipient of the Purple Heart. After being honorably discharged in 1945, he returned to his job as a welder/pipefitter for Colgate-Palmolive-Peet.
He retired in 1975, moving permanently to his farm near La Cygne where he had been enjoying hunting and fishing since 1954. Delmer was an excellent athlete, gardener and avid bowler. He was the happiest being in the outdoors, hunting, fishing and teaching his grandchildren an appreciation for the outdoors. He was a member of the Wyandotte Masonic Lodge #3 and the V.F.W.
He was also preceded in death by his parents; brother, Alvin Ferguson; two sisters, Christine Ferguson and Helen White; a daughter, Christine Ferguson; and a grandson Jesse Delmer Cox.
He is survived by a daughter, Darlene Ferguson Cox and husband Wayne; son, Henry Ferguson and wife Sally; four grandsons, Michael Ortego and wife Alesia, John “Buck” Ortego and wife Brenda, Joe Macoubrie and Matthew Ferguson; granddaughter by marriage, Cherie DeCoster and husband Frank.
Funeral service will be held at 10 a.m. Friday, Aug. 28, 2015, at the Schneider Funeral Home and Crematory, La Cygne Chapel. Burial will be in the Oak Lawn Cemetery. Visitation will be held from 5- 7 p.m. Thursday at the Chapel. The family suggests contributions to the Audubon Society, c/o Schneider Funeral Home, P.O. Box 304, La Cygne, KS 66040. Online condolences for the family may be left at www.schneiderfunerals.com. Arrangements: Schneider Funeral Home and Crematory, La Cygne Chapel.