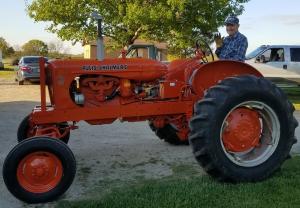 Donald E. "Buddy" Payne, age 85, Pleasanton, Kan., passed away on Wednesday, July 10, 2019, in Via Christi Fort Scott, Kan. He was born in Trading Post, Kan., on Nov. 9, 1933, the son of William Wood and Euleta Louise "Babe" Dalton Payne. Before he was one day old, his older brother John gave him the nickname Buddy, which stayed with him throughout his life. He attended school in Trading Post. After eighth grade he stayed home to help support his family, working in the tobacco fields and Murray farm where he began driving a tractor at 10 years of age.

Buddy served his country in the United States Army stationed in Korea.

He was united in marriage to Lois Weller on July 28, 1956, in Pleasanton Christian Church.

Buddy cultivated a tremendous work ethic. He became an over the road truck driver for Steven's Produce, which was later acquired by J.B. Hunt Trucking. Buddy and his father-in-law, Luther Weller, were the first two drivers leasing their own trucks to that company. Later he worked as a machine operator for P & M Coal Co. and was there till the mine closed and he retired. During those years he farmed, raised cattle and operated a bulldozer, doing farm work in the surrounding communities.

He was a member of the Pleasanton Church of the Nazarene and the United Mine Workers Union.

He was preceded in death by his parents and one grandson, Joshua Leach.

Funeral service was scheduled for 10 a.m. Monday, July 15, 2019, at the Pleasanton Church of the Nazarene with burial in the Littell Cemetery.

Contributions are suggested to the Nazarene Church. Online condolences can be left at www.schneiderfunerals.com.