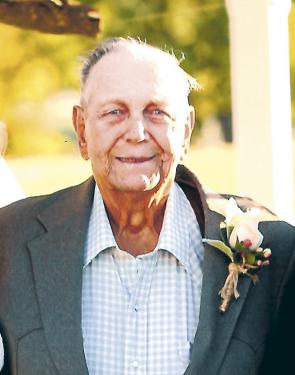 Donald Lee Breuel, age 84, Mound City, Kan., passed away on Friday, Oct. 30, 2015, at the Olathe Hospice House. He was born on May 19, 1931, at Mound City, Kan., the son of Fred and Carrie Park Breuel.
He graduated from Parker High School. Don worked as a pipe liner, maintenance supervisor for Phillip’s Petroleum, and as a farmer and stockman.
He was a member of the Parker (Kansas) Masonic Lodge; Scottish Rite Consistory, Fort Scott; and Mirza Temple, Pittsburg.
He married Lois McCarty on Feb. 14, 1953. She preceded him in death on Feb. 27, 2012.
He was also preceded in death by his parents and a brother Bob Breuel.
He is survived by two sons Greg Breuel and wife, Jackie, and Larry Breuel and wife, Trish; two daughters Pam Johnson and husband, Jim, and Tammy Peterson and husband, Kelly; a brother Jerry Breuel; nine grandchildren Janelle, Jamie, Cody, Tyler, Connor, Trenton, Derrick, Kandice and Lindsey; four great-grandchildren Mason, Hank, Madison and Gus; and three step-grandchildren Jake, Jodie and Jamie.
Funeral service will be at 11 a.m., Wednesday, Nov. 4, 2015, at the Mound City First Baptist Church. Burial will be in the Woodland Cemetery. Visitation will be held from 5–7 p.m., Tuesday at the Breuel Home, 12211 W. 900 Rd, Mound City, KS 66056. The family suggests contributions to the Olathe Hospice House. Online condolences for the family may be left at www.schneiderfunerals.com. Arrangements: Schneider Funeral Home and Crematory, Mound City Chapel.