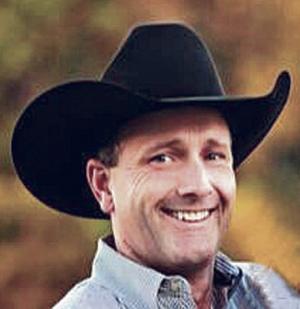 Linn County News
Published May 10, 2017
Douglas Blaine Hazelbaker, age 51, a resident of rural Redfield, passed away early Monday, May 1, 2017, at the Mercy Hospital in Fort Scott. Doug was born May 31, 1965, to Alice and Norman Hazelbaker.
He and his wife, Jana, were married on Aug. 17, 2002, and are the parents of daughters Dylan and Dakota.
In 1983, he graduated from Uniontown High School. While in high school, he competed in the Kansas State High School Rodeo Assoc., and he was the state champion in both calf roping and steer wrestling, and the Reserve All-Around cowboy his senior year. While attending Allen County Community College and Northwestern Oklahoma State University, he competed in both calf roping and steer wrestling, and earned a bachelor’s degree in education.
Doug began his teaching career as a fourth-grade teacher and was teaching middle school math at Jayhawk-Linn in Mound City, where he touched the lives of many young people and worked with wonderful friends over the past 25 years.
His passion for calf roping extended well beyond college, and he logged many miles from rodeo to rodeo building great friendships over the years. Some of his accomplishments in calf roping include IPRA rookie of the year, Great Lakes PRCA circuit finals contestant, Cheyenne Frontier Days performance qualifier and IFR qualifier in 1991. In 2016, he qualified for the Interstates Rodeo Assoc. finals, and Dylan wears his jacket from that association. He also competed in the United Rodeo Association for many years, and in the year-end finals for 2016 finished fifth overall in the over 40 calf roping. Dakota is honored to wear his URA jacket, and Dylan proudly wears the belt buckle he won.
Survivors include his wife Jana and daughters Dylan and Dakota of the home; parents Norman and Alice Hazelbaker, Redfield, Kan.; a sister, Carol Camac and husband Joe, Augusta, Kan.; a brother, Mike Hazelbaker and wife Susan, Alma, Kan.; and nieces and nephews Cole, Travis and Lucas Camac, Cole Fowles, Cassidy Anderson, Quincy and Emma Charleston, and Cooper, Colton and Canyon Charleston.
Cowboy Preacher Marty Brock conducted memorial services Friday, May 5, at the Fort Scott Fairgrounds Arena.
In lieu of flowers, the family strongly suggested memorials to the Hazelbaker Girls’ Scholarship Fund, which may be left in care of the Cheney Witt Chapel, PO Box 347, 201 S. Main, Fort Scott, KS 66701. Words of remembrance may be submitted to the online guestbook at cheneywitt.com. The family had asked for any special memory or story of Doug to be brought to the service or mailed to Jana Hazelbaker, 1311 Hwy. 54, Redfield, KS 66769. These memories will be used to compile a scrapbook for Dylan and Dakota.