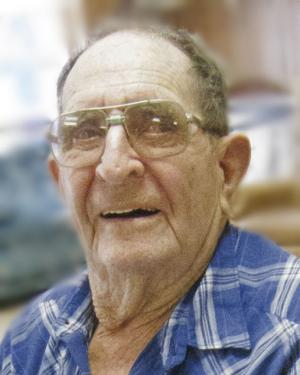 Duane Robert Kintigh, the third son of Clarence and Nettie (Jurey) Kintigh, was born March 13, 1926, at the Norton Hospital, Norton, Kan. He was named Robert Duane but had always been called by his middle name, Duane. He passed away Sept.19, 2015, at the Brodstone Memorial Hospital in Superior, Neb., at the age of 89 years, 6 months, 16 days.
Growing up, he attended school in Norton, Kan. He served in the Army Air Corp for 18 months. Enroute home on the train to Norton after his discharge from the service, he met his future wife who was returning from a visit to some friends in Iowa. After some time of courting, Duane and Vivian Bouray were married July 20, 1947. They lived in the Hardy, Neb., area and were engaged in farming until retirement. They had five children: their first born son, Robert Duane died in infancy in 1949; Sharon Marie (Bearley) born in 1950 and died in 2014; Michael Ray born in 1951; Debora Ann (Staton) born in 1953; and Roger Linn born in 1954.
They celebrated their 50th wedding anniversary in July 1997.
He is preceded in death by his parents; wife Vivian in February of 2000; infant son Robert Duane Kintigh; daughter Sharon Bearley; grandson Michael Anthony Kintigh; and brother Clair Kintigh.
He is survived by his children Michael of Fairview, Kan.; daughter Debora Staton and husband Doug of Pleasanton, Kan.; and Roger and wife Jeanine of Webber, Kan.; son-in-law Robert Bearley of Kensington, Kan.; 10 grandchildren, Bobby Bearley and wife Julie, Crystal Bearley and husband Sean Knox, Justin Bearley and wife Lori, Brianne Kintigh, Ryan Kintigh and wife Kayla, Jennifer Umphenour and husband Eric, Sara Russell and husband Luke, Jason Kintigh and wife Melissa, Bryce Kintigh, and Allison Kintigh; 16 great-grandchildren, Aubrey, Ethan and Elijah Bearley, Addison, Emmerson and Jackson Bearley, Braelyn Kintigh, Kori, Kara, and Kali Umphenour, Kyle, Kala, and Kane Russell, Gavin, Zachary and Holley Kintigh; one sister Lula Hix of Phoenix, Ariz., and one brother Cletus Kintigh, Lyons, Kan.; nieces, nephews, other relatives and a host of friends.
Funeral services were held Thursday, Sept. 24, 2015, at Megrue-Price Funeral Home in Superior, Neb., with Pastor David Johnson officiating. After the service the Honor Guard folded and presented the flag to his family.
Music was “Amazing Grace” and “Daddy’s Hands” with Carlita Price as the organist and Stephanie Thayer as the soloist.
Private family inurnment will be held at a later date in the Evergreen Cemetery at Superior, Neb.
Memorials are suggested to go to Hardy or Superior Volunteer Fire Departments.
Condolences may be sent to Megrue-Price Funeral Home, 750 N Commercial, Superior, Nebraska 68978 or in care of www.pricefuneralhomes.com.
Megrue-Price Funeral Home of Superior, Nebraska was in charge of the arrangements.