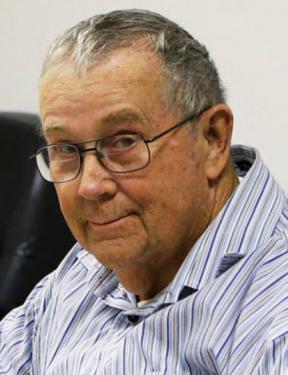 Linn County News
Published Aug. 8, 2018
Eldred S. Whitley, age 79, Pleasanton, Kan., passed away on Tuesday, Aug. 7, 2018. He was born on May 10, 1939, in Carrollton, Mo., the son of Joseph and Hazel Brock Whitley. He graduated from Olathe High School.
He married Carol Adams on July 2, 1961.
Eldred served his country in the United States Air Force. After being honorably discharged, he was employed as a mechanic or truck driver at various businesses for most of his working career. He also owned his own trash business.
He was a member of the Pleasanton Assembly of God and had served as a deacon. He was mayor of the city of Pleasanton for two plus terms.
He was preceded in death by his parents; and a granddaughter, Tiera.
Eldred is survived by his wife Carol; two sons, Jeff Whitley and wife Cindy, and Jerry Whitley and wife Mary; a daughter, Julie Eichenberger and husband Ed; a brother, Howard Whitley; five grandchildren, Joe, Shelby, Johnathon, Daniel and Justin; and four great grandchildren, Destinee, Natalee, Haiden and Catalina.
Funeral service will be held 2 p.m. Friday, Aug. 10, 2018, at the Pleasanton Assembly of God Church. Burial will be in the Fairview Cemetery. Visitation will be held from 6-8 p.m. Thursday, Aug. 9, at the Schneider Funeral Home and Crematory, Pleasanton Chapel.
The family suggests contributions to the University of Kansas Heart Institute. Online condolences can be left at www.schneiderfunerals.com.