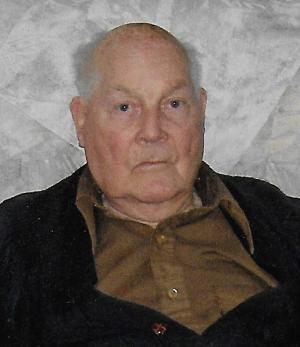 Elton E. Fletcher, age 96, Pleasanton, Kan., passed away on Friday, Nov. 30, 2018, at the Galena Nursing Center. He was born in Mound City, Kan., on Aug. 2, 1922, the son of Ernest and Blanche Cvarfordt Fletcher.
He served his country in the United States Army during World War II. He worked as a steel fabricator for Greham Steel.
He was a Baptist by faith. He was a faithful attendee at all Pleasanton Blu-Jay activities.
He was preceded in death by his parents; a son, Calvin; an infant daughter; a brother, Calvin; and a sister, Shirley Main.
Elton is survived by four sons, Dale Fletcher and Cindy, Wayne Fletcher and Shanna, Bob Fletcher and Rick Fletcher; two daughters, Phyllis Staton and Mike, and Doris Rupert and Larry; 13 grandchildren; and 20 great grandchildren.
Funeral service will be 10:30 a.m. Saturday, Dec. 8, 2018, at the Schneider Funeral Home and Crematory, Pleasanton Chapel. Burial will be in Mount Carmel Cemetery. Visitation will be held from 9:30 a.m. until service time.
The family suggests contributions to Care to Share. Online condolences can be left at www.schneiderfunerals.com. Arrangements: Schneider Funeral Home and Crematory, Pleasanton Chapel.