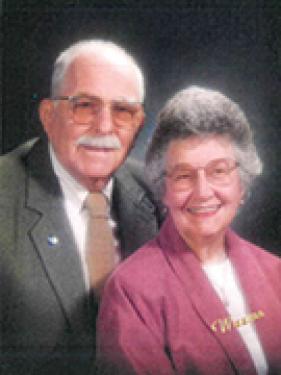 Elynor married Raymond (Ray) Herbert Miller (deceased, Aug. 2, 2002) Dec. 21, 1946, upon his return from Naval duty in World War II. Being a lifetime member of Beta Sigma Phi (BSP), as well as Quilter’s Guilds at her churches and the Daughters of the American Revolution (DAR) for over 70 years, kept her active.

Living in Battle Creek, Mich.; Houlton, Maine, and Marquette, Mich., the family loved the winter settings, with two children born in each state. Moving to Park Forest, Ill., Elynor worked as a loving homemaker and secretary for Wilson Sporting Goods.

Moving to Overland Park, Kan., Elynor kept busy with church work at Faith Lutheran, quilting, DAR and BSP. A short stint in Marshall, Texas, saw the family move back to Olathe, Kan. Elynor worked at Kemper Insurance moving up to lead secretary in her division. She always fancied taking the stairs to aid her fitness, convincing fellow employees to do the same.

Retirement was enjoyed at Sugar Valley outside of Mound City, Kan., where they quickly integrated into the community aiding any way they could. Elynor participated in many community activities including the fair and quilting as well as work with the Historical Society. They enjoyed the serene pace of life and fondly remembered all of their friends.

She was preceded in death by Ray; daughter Patricia (Trish) Jean Provo; Trish’s husband Roland; and sisters BJ and Jan and their husbands.

Cremation will be followed by internment next to her husband at Oaklawn Memorial Gardens. Services are Thursday, Aug. 6, Johnson County Funeral Chapel. The service will be available online at the funeral website, under her obituary page. Elynor requested donations to the American Heart Association as a memorial.