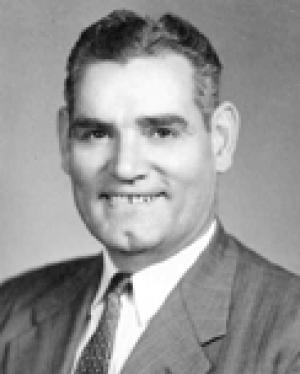 Emory Rubin Arnold, 98, resident of Fort Scott, Kan., died Sunday, June 21, 2015, at Mercy Hospital in Fort Scott. He was born May 28, 1917, in Roxbury, Kan., the son of Robert and Katie Arnold. He graduated from Pleasanton High School.
He married LaVon Geisler March 17, 1939, at Girard, Kan. She preceded him in death Nov. 15, 2000. He graduated from Fort Scott Junior College and Pittsburg State, playing football at both. He served in the National Guard for six years before entering active service in the U. S. Air Force during WWII.
Emory began his career teaching at Pittsburg High School. He moved to Towanda, Kan., in 1951, as superintendent for 13 years. He then moved to Fort Scott in 1965 to work for Fort Scott Junior College, serving as registrar, assistant dean, athletic director, and vice president, until his retirement in 1981. The arena at FSCC bears his name. After retiring, he owned and operated his own ranch. He wrote an autobiography which would grow to include poetry and songs. For this work he won the 2002 Springfield, Missouri Writers Guild Award. He was a 32nd degree Mason and an antique car buff. He was a member of the First United Methodist Church in Fort Scott.
Survivors include his daughter, Sue Sayers and husband Harry, Fort Scott; eight grandchildren, Heather Davenport, Crystal Arnold, Ashley Mahnken, Kyle Green, Michael Arnold, Charles Arnold, Stacy Sullivan, and Dean Sayers; 11 great-grandchildren; and numerous nieces and nephews.
In addition to his wife, he was preceded in death by a son, Abraham “Dan” Arnold.
Rev. Steve Cole will conduct funeral services at 10:30 a.m. Monday, June 29, at the First United Methodist Church, Fort Scott. Burial will follow in Evergreen Cemetery. Military honors will be provided by the Olson Frary Burkhart Post #1165 V.F.W.  The family will receive friends from 4-6 p.m. Sunday, June 28, at the Cheney Witt Chapel, 201 S. Main, PO Box 347, Fort Scott, KS 66701. Memorials are suggested to either FSCC Arnold Arena or V.F.W. Post #1165 and may be left in care of Cheney Witt Chapel. Words of remembrance may be submitted to the online guestbook at cheneywitt.com.