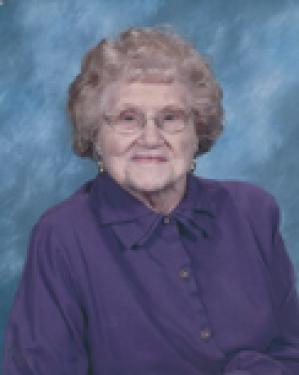 Evelyn Isabelle (Moslander) Winburn was born Aug. 10, 1920, to Guy and Sadie (Kinney) Moslander in Pleasanton, Kan. She graduated from Pleasanton High School in 1939 and married Ralph Frank Winburn on Dec. 20, 1941. They were married for just over 51 years before Ralph was called home to heaven on April 23, 1993. Isabelle remained a widow for 22 years before she, too, was called to her Lord on March 02, 2015, at the age of 94.
Isabelle was a devoted wife, mother, grandmother, and great-grandmother. She served in her community in many ways for many years, including Brownie and Girl Scout leader and volunteer on PTA/school committees. She volunteered right up into her 70s and 80s for Meals on Wheels, helping to prepare “meals for those old people” (which did not include her!). She served in her local church, Parkwood Christian Church (now New Heights Christian Church) as a Sunday school teacher, nursery worker, women’s circle leader, elder’s wife, seniors’ ministry leader (teenagers) and so many other avenues of service.
She had the gift of gracious hospitality and often had guests in her home. She loved to cook and was very talented in the kitchen (her pies were great fundraisers for charities) and she helped to host many various events with style and grace.
Isabelle is survived by their four children, Ralph Leon (and Alice) Winburn and their children, Mark (and Jena) Winburn; Michael (and Debbie) Winburn and their two sons, Jason Winburn and Matthew Winburn; Richard (and Toy) Winburn and his son Scott (Jane) Winburn; Cheryl (and Tim) Doggett and their children Chelsie (and Erik) Neufeld and Luke (and Erika) Doggett; and five grandchildren.
She was preceded in death by her husband, Ralph; her sister, Mary (Moslander) McGinnis; and her brother, Ernest Moslander. Other family members and many good friends are in Heaven to welcome her home. There are celebrations in Heaven when another child is called home!
A Memorial Service will be held March 28, 2015, at New Heights Christian Church in Bridgeton, Mo. The visitation with family is to begin at 5:30 p.m., followed by the service at 7 p.m. All are welcome to attend.