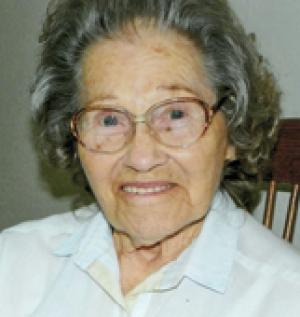 On Sept. 7, 1942, she married her high school sweetheart George G. Long of Hume, Mo. While serving in the U.S. Army Air Force in World War II he died during a training mission. On Aug. 22, 1945, Florence was remarried in Colorado Springs, Colo., to Charles C. McQuitty of Prescott while he was also serving his country during World War II. After the war, the couple returned to Prescott, eventually moving to the family farm. There they raised two daughters and also shorthorn cattle.

Florence enjoyed sewing and gardening, was an excellent cook and was active in several local women’s clubs. She was also a leader in 4-H sewing and cooking classes. Other hobbies she mastered were knitting, crocheting and oil painting. Florence illustrated Charles’ published book of poems entitled Country Life in 1983. The couple sold the farm in 1992 and moved outside of Durango, Colo., where they lived for 11 years before returning to Kansas; living in Chanute to be close to a grandchild and great-grandchildren.

She was preceded in death by her parents; an infant son; a brother Raymond Robinson; and her husband, Charles.

Cremation has been requested. A memorial service will be held at a later date and time to be announced at Fort Scott National Cemetery where she will join Charles. In lieu of flowers, please consider donating to The Wounded Warrior Project, P.O. Box 758517, Topeka, KS 66675. Online condolences may be left at www.countrysidefh.com.