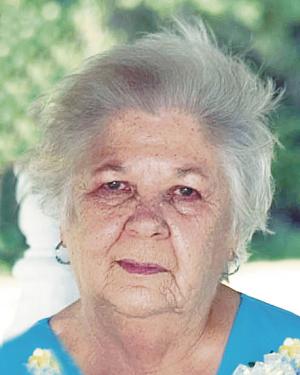 Linn County News
Published May 10, 2017
Frances G. Hall, age 79, passed from this life on Saturday, May 6, 2017. She was born Nov. 30, 1937, to George and Mary (Hubbard) Wingate in Leeton, Mo. She graduated from McClouth High School.
Growing up, Frances was an accomplished horsewoman. Among those accomplishments, she was the 1953 Kansas State Champion and the 1953 Missouri State Runner-Up in Western Pleasure and Horsemanship. In 1954, she repeated as the Kansas Western Pleasure and Horsemanship Champion and won the 1954 Missouri State Champion in both Western Pleasure and Horsemanship.
Frances ran and retired from the Fort Scott Sale Barn Cafe located in the Fort Scott Livestock Barn where she cooked and served delicious home-style cooking for many years. Frances was well-known for her cooking and baking skills –especially her pies. She was lovingly known as “The Pie Lady.”
She lived life her way – working hard, being honest and straight forward, and with kindness in her heart! Frances was always willing to help those in need.
She is survived by her children, Randy Hunsperger and wife Cathy of Yates Center, Kan., Brenda Robertson and husband Ken of Pittsburg, Kan., Sharon Olivas and husband Mike of Fort Scott, Kan., and Larry Bowman and wife Twyla of Fulton, Kan.; and a brother, George Wingate and wife Carol of Paola, Kan. Frances is also survived by 12 grandchildren and many great-grandchildren, as well as many others who lovingly referred to her as “Mom” or “Grandma.”
She was preceded in death by her parents; a daughter, Donna Linn, formerly of Uniontown, Kan.; a brother, Bill Wingate, formerly of Bronson, Kan.; a grandson, Butch Hall, formerly of Uniontown; as well as four great-grandchildren.
There was cremation. The family will receive friends from 7-9 p.m. Thursday evening, May 11, at the Cheney Witt Chapel.
In lieu of flowers, the family suggests donations to Care to Share which may be left in care of the Cheney Witt Chapel, PO Box 347, 201 S. Main, Fort Scott, KS 66701. Words of remembrance may be submitted to the online guestbook at cheneywitt.com.