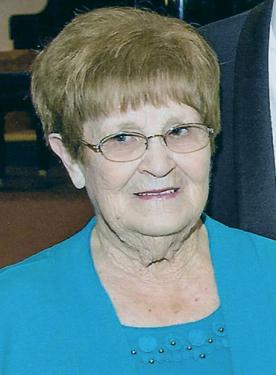 Frances Illene Kettler, age 85, of Paola, Kan., passed away on Monday, Jan. 16, 2017, at the Olathe Medical Center. She was born on March 24, 1931, at Jingo, Kan., the daughter of Harold LeRoy and Ruby Frances Driskell Mendenhall. She graduated from La Cygne High School in the Class of 1949.
Illene married Norman Kettler on March 11, 1951. He preceded her in death on March 9, 2016.
She worked on their dairy farm until becoming a beautician in the mid-1980s. She was a member of the New Lancaster United Methodist Church and the United Methodist Women and EHU, and enjoyed attending the La Cygne Alumni.
She was also preceded in death by a sister, Maxine Maris.
Illene is survived by two sons, Randy Kettler and wife Treva, and Kevin Kettler and wife Connie; a brother, Eugene Mendenhall and wife Loree; and 13 grandchildren and three great-grandchildren.
Funeral service will be held at 10:30 a.m. Friday, Jan. 20, 2017, at the New Lancaster United Methodist Church. Burial will be in the New Lancaster Cemetery. Visitation will be held from 5- 7 p.m. Thursday at the Schneider Funeral Home and Crematory, La Cygne Chapel.
The family suggests contributions to La Cygne Alumni, New Lancaster Methodist Church or Prairie View FFA. Online condolences for the family may be left at www.schneiderfunerals.com. Arrangements: Schneider Funeral Home and Crematory, La Cygne Chapel.