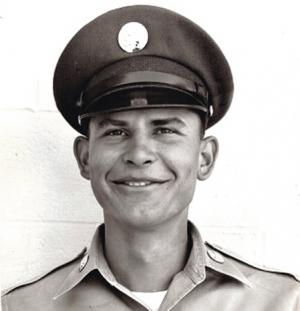 Harold Jay Holmes, age 77, Prescott, Kan., passed away on Monday, March 6, 2017, at the Prescott Country View. He was born on Dec. 15, 1939, at Prescott, the son of Harold S. and Marguerite Coon Holmes. He graduated from Prescott High School in 1957.
Jay served his country in the United States Army from 1963 through 1965 stationed in Germany. Jay lived and farmed in the Prescott area until he moved to Fort Scott in 1998.
He loved to fish, spending lots of time catching big bass at the coal pits near Prescott. He loved music and was a fantastic trumpet player.
He was married to Jane Turpin and was later divorced.
He is survived by a sister, Elma Avery of Fort Scott; a brother, Leon and wife Marilyn of Prescott; and four nieces and four nephews.
He was preceded in death by his parents; a brother, Milton; and a nephew, Jay Lee Cassida.
Graveside service will be held at 2 p.m. Friday, March 10, 2017, at the Holmes Cemetery in Prescott.
The family suggests contributions to Prescott Country View Nursing Home, which may be sent in care of Schneider Funeral Home, P.O. Box 525, Pleasanton, KS 66075. Online condolences may be left at www.schneiderfunerals.com. Arrangements: Schneider Funeral Home and Crematory, Pleasanton Chapel.