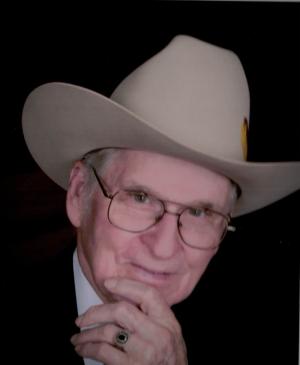 He went to school at Farlinville County School and then attended one year at Mound City High School. Harold was a rancher, farmer and song writer all his life. The love of farming and raising cattle was his calling.

On June 6, 1954, Harold married the love of his life, Patsy Louise Mundell, at the home of her parents in Centerville, Kan. They lived on a farm near Farlinville andfarmed on Big Sugar Creek.

In 1955 Harold joined Richland Grange No. 1995 as a charter member. He held many local and state offices and was currently serving as treasurer. Harold was known as the peanut brittle or candy man for his love of making peanut brittle with the Grange. In 1962, Harold helped organize the Linn County Polled Hereford Association. That same year, Harold and wife Patty were National Grange Young Couple of the Year. They were recognized at the National Convention in Fort Wayne, Ind., for their outstanding Grange work. Harold was also very community and civic minded. He served as secretary and treasurer for the Farlinville Telephone Office for years. He served on many boards throughout the county including the Linn County Coop Board, the Rural Electric Board and the Linn County Extension Board. He was a member of the Linn County Republican Sunflower Club. For many years, he and Patty were members of The Linn County Promenaders, a square dance group. Harold and Patty enjoyed traveling and they have traveled to every state by airplane, train or car. In 1983, they joined an agriculture group and traveled to Holland, Germany, France, Switzerland and England.

Harold was preceded in death by his parents; one brother, Beryl West; and two sisters, Alma Cosens and Beatrice Foster.

Survivors include his wife of 65 years, Patty, of the home; one son and daughter-in-law, Randy and Kristi West; one daughter and son-in-law, Darla and Thomas Drain; four grandchildren, Nathan Drain and wife Lily, Kyle West, Ryan West and wife Jenni, and Arwen Drain; two great granddaughters, Ruby and Molly West; a sister, Mary Sue Gentrey of Maurepas, Louisiana; and several nieces and nephews.

Funeral services will be held at 3 p.m. Friday, Sept. 13, 2019, at Mound City United Methodist Church. Visitation will be from 1:30 p.m. until service time at the church. Burial will follow in Woodland Cemetery, Mound City.